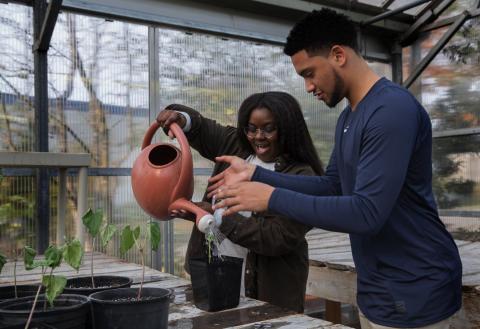 Four years ago, a group of faculty and staff members at Highline College took an exploratory trip to the San Francisco Bay Area.

Their mission: Find some way to help more black students earn enough college credit each school year and lower the rate at which they enter remedial classes — which they would pay for at full cost but earn no credit.

Nationally, up to 60 percent of students attending college for the first time require some remediation in English, math or both, increasing the time it takes them to graduate and decreasing the chances that they’ll ever graduate at all.

“It takes them a longer time to get to that college (credit) level, and that’s where a lot of our attrition comes from,” said Liz Word, a faculty member in communication studies at Highline in Des Moines.

But at the Chabot and Diablo Valley colleges in Hayward and Pleasant Hill, California, Word and her colleagues discovered the Umoja Community program. Named after the Swahili word for “unity,” Umoja places small groups of its students together in the same set of classes that include cultural context through an African-American lens — such as studying the legacy and trauma of slavery in America on today’s black community. The program also includes mentorship and academic advising.

In Washington state, only 16 percent of black students who transfer to a community or technical college complete a program within three years. For all students, the completion rate is 23 percent, according to data that Highline College provided from the State Board for Community and Technical Colleges. (Nationally, 20 percent of first-time, full-time students earn a degree or certificate at community college within three years.)

The results in California persuaded administrators at Highline College to allow Word to pilot an Umoja Black Scholars program. And now, three years later and with nearly 100 students participating, Word can point to its impact on student success.

“We are still struggling with black students,” she said. However, “we’re making inroads at a larger scale than we ever have before.”

Umoja has grown to more than five dozen college campuses across California. The pilot at Highline College is the first and only one outside of the Golden State, and it has spawned similar programs for Latino students and Asian American and Native Hawaiian/Pacific Island students attending the South King County campus.

Word emphasized that kind of success is noteworthy considering that a full two-thirds of Umoja students are the first in their family to go to college. The age range of Umoja students, she added, spans from 16 to over 40.

“We get students completing their GED (and) students who were previously incarcerated. We get everything,” Word said. “Community college plays this role where we take you as you are. Umoja comes in and makes sure you’re actually ready.”

On Tuesday, Chalisa Thompson joined her fellow Umoja students in the college’s greenhouse to help them repot some bean plants in a class that merges environmental science with sociology.

Thompson described the course as her favorite in the Umoja curriculum, and said it helped her think about how individuals can work within the structures of society to help make it better. And that’s a goal she plans to achieve once she earns her master’s degree in social work at the University of Washington.

“I want to help people like me, people who have gone through the same trauma,” Thompson said.

Earlier this month, Thompson — now student-body vice president — shared some of that trauma during a student panel the Black Education Strategy Roundtable hosted at its annual conference in Des Moines.

Thompson recalled watching her mother being taken to prison when she was 10 years old. Her older brother died at 21, and after graduating from high school, she found herself without a place to live.

“To go from a 1.7 GPA in high school to a 4.0 student now,” Thompson said, “for me to make that transformation says a lot about Umoja Black Scholars.”

“Just using the word ‘scholar’ gave me hope as a student,” she added. “Umoja is really there to show you that yes, you can succeed.”

After her panel, the manager of UW’s social-work program introduced herself to Thompson and pledged to get her in the door.

Umoja actively serves and promotes student success for all students through a curriculum and pedagogy responsive to the legacy of the African and African American Diasporas.